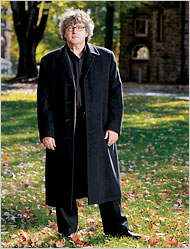 Poetic reputations are fragile and fleeting, and often hard to measure. Depending on which critic you listen to, Muldoon, at 55, is “one of the five or so best poets alive,” “the most significant English-language poet born since the Second World War” and a serious contender for the Nobel Prize, or else he is a victim of “pyrotechnical autism” who writes “artificially enriched, overinformed doggerel.” And his literary criticism is even worse. “Bedlam — an associative madness,” the Oxford don Valentine Cunningham said after listening to some of Muldoon’s Oxford lectures.

Not that Muldoon pays much attention to his critics. He is preoccupied these days with his other careers — as a university administrator and a minor-league rock musician. He sports an Irish-Afro hairdo — an hommage, perhaps, to Heaney’s famously unruly thatch — and he still speaks with an Ulster accent. In fact, he sounds a little like David Feherty, the television golf commentator.