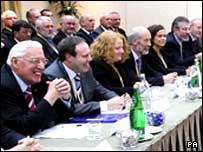 Arguably a reason the multi-party Belfast Agreement (pdf file) unravelled was because it was a high political deal not a ‘community’ deal. The tentative steps to sharing the space of government were not reflected on many of Ulster’s streets. Interface violence, sectarian attacks and anti-parade campaigns continued or grew. How does the potentially ‘all-party’ St Andrews Agreement (pdf file) avoid a repeat of that pitfall? How do the two main communities reach agreement on how they share the cities, towns and villages of Northern Ireland? Or with the main paramilitary groups leaving the field (at different paces) is a big political deal all that is needed this time?In Londonderry’s Guildhall on Tuesday there will be a Community Convention to discuss the recent University of Ulster report (pdf file) on Protestant alienation in the Derry City Council area. The event will include contributions from Sinn Fein and the SDLP. The event has been welcomed by Martina Anderson, SF’s Director of Unionist engagement, and sees it as a model for similar engagement with nationalist minorities:

“It is important that we develop an understanding of the Protestant population’s feelings of alienation in the city and look at ways of addressing this. The hope would be that this would also have a positive impact on other areas where there is institutionalised alienation of nationalists.”

One issue of alientation is the ongoing court case about the city’s name. Court cases provide decisions not resolutions to problems. With the St Andrews Agreement putting the re-organisation of local government back up for debate the issue has become less urgent. Should the nationalist parties take advantage of this breathing space, put the case on hold and discuss the issue with the Protestant minority of the city or at least conduct an Equality Impact Assessment of the name policy decision?