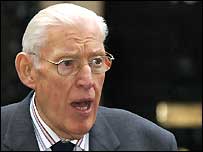 Following over a year of behind the scenes contacts a DUP delegation including Ian Paisley will meet with the leader of the Catholic Chruch in Ireland, Sean Brady. Gregory Campbell said:

“We will give him reassurance on our commitment to power sharing if he requires it.”

Meanwhile, the Sunday Times claims it will be confirmed this week that Gerry Adams’ fingerprints have been found on a car used in a double murder in 1972. More detail here. UPDATE As the commenting on this thread has gone massively off topic and for a small number descended into sectarian trolling comments have been closed. If you want to heap sectarian abuse feck off to the utv website where you will be made to feel at home. Slugger has standards.