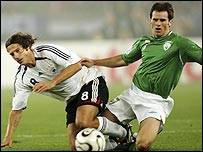 Ireland lost 1-0 to Germany in the first match of the European Championship qualifying group tonight. The Germans deserved their victory on the night, though the goal itself was unfortunate for Ireland – a deflection off of Robbie Keane from a free-kick. A great first half performance, which saw Shay Given make several crucial saves to keep the score level. Kevin Doyle played well up front, making several timely tackles to relieve the German pressure, but the failure to get Damian Duff on the ball more often meant the Irish side failed to retain possession for long enough to put together any more than a couple of half chances.
The decision by Staunton to substitute Ireland’s two most impressive outfield players- Doyle and Duff- was perplexing, and the manager did himself no favours by getting banished to the stands for several outbursts which ultimately cost him his place on the bench. Though the result was better than many expected, following that 4-0 home defeat to Holland several weeks ago, it still leaves Staunton and the team with an uphill battle to live up to national expectations, however unrealistic those may be…..Still, the Apres Match performance was top drawer, as usual!