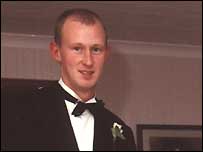 The UVF is being linked to the murder of Ronald Mackie at the weekend. The killing followed a loyalist band parade in nearby Maghera and an associated function, held in the grounds of IFA First Division side, Tobermore United. The killing will likely bring further pressure on Ulster Unionist leader, Reg Empey, who formalised an Assembly alliance with the Progressive Unionist Party earlier this year, to the annoyance of some fellow party figures.