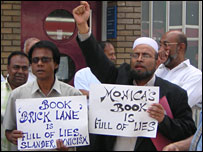 The Bangladeshi community of Brick Lane held a protest against the proposed film adaption of the award-winning novel named after their community. They object to the stereotyping of their community and believe the film will reinforce this. Plans to film scenes of the film in Brick Lane have been dropped because of the local opposition. Mass media representation of the Ulster conflict has often been accused of the same. How much do fictional representations determine external perceptions of communities and issues?