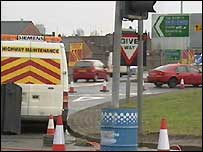 Secretary of State Peter Hain has announced an increase in road infrastructure investment from £1bn to £1.4bn from now to 2015. The traditional complaint of the West being ignored is (partially?) addressed with an almost even split in the new investment. Investment in infrastructure is generally considered a key plank in economic development.