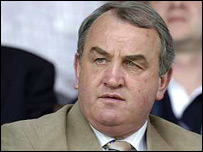 The Daily Ireland reports that recently elected GAA President, Nickey Brennan offically opened a new GAA field named in honour of the IRA INLA terrorist and hunger striker, Kevin Lynch. Has the new president, the GAA clubs and members breached Rule 7A? The article says that these events were organised by “Sinn Fein and Republican Sinn Fein” and included Martin McGuinness giving an oration at St Canice GAA Hall(Update of new link). Rule 7A states:
“Non-Party Political
(a) The Association shall be non-party political. Party political questions shall not be discussed at its meetings, and no Committee, Club, Council or representative thereof shall take part, as such, in any party political movement. A penalty of up to twenty four weeks suspension may be imposed for infringement.”

Update Gregory Campbell gives a response to the weekend’s events .