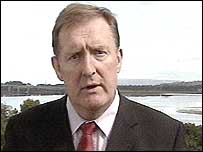 A hoax bomb has been left at the Bogside home of Pat Ramsey, the 14th such incident and part of an ongoing campaign of intimidation because of his support for police.There was another hoax bomb incident yesterday on the Strabane by-pass. Local Sinn Fein councillor Ivan Barr thinks its aim was(subs required):

“…to cause maximum disruption and force traffic onto the Melmount Road. It appears to be some sort of ruse to make Orangemen an easier target.”
He said he had received reports of young people stockpiling bricks and stones in the Melmount Road cemetery. The councillor said such behaviour was “wholly unacceptable”.