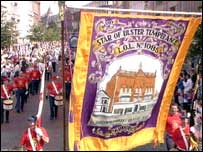 The will be 17 main parades today for the Twelfth of July plus the local parades. A North Antrim Orange Hall was burnt down last night. In signs of normalisation the Army will not be deployed today.The Parade Commission determinations that have caused a public spat are the Dunloy parade and at Ardoyne the issue of Upper North/Ballysillan residents using the Crumlin Road to get home in the evening. In Dunloy, local SF representative has described a wreath-laying ceremony by the local lodge in the village Presbyterian Chruch as “coat-trailing” while in North Belfast neither side is happy with the proposals for buses for Upper North/Ballysillan residents.

PS For obvious reasons I won’t be about until later this evening so I won’t be playing my usual active role on threads today.