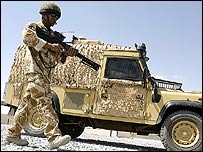 Captain David Patten will be buried in Aghadowey today with full military honours. He died in a Taleban attack in the Helmand province of southern Afghanistan. He will be buried beside his father who was a Major in the Ulster Defence Regiment. Meanwhile, Jeffrey Donaldson has been voicing concerns about proper equipment for front-line troops as 100 troops of the Royal Irish prepare to be sent to the same area. Such concerns are not new, the Ministry of Defence has a long history of over-spending billions on huge contracts but refusing to spend millions on basic equipment.