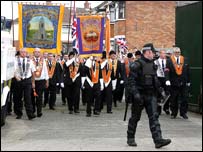 I have just returned from the annual Whiterock parade. Both the parade and protest went off without a hitch (as far as I could see). I must admit that today made me genuinely hopeful. I don’t care about “They only did it because….” or “But what about…” . Both sides delivered. After just missing total success at the Tour of the North and a total success at the Whiterock two good precedents have been set. I can remember debating on here with many who said that the democratic standard of a peaceful parade with opponents protesting peacefully was something that would be very difficult/impossible to achieve. Today it was achieved and in an area hard hit by the troubles.

PS I am promised some video footage in the next couple of days.