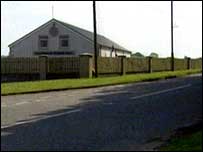 The Orange Order has revealed that Killygullib Orange Hall, petrol bombed on Friday night, was paint bombed ten days ago and was rebuilt two years ago after being badly vandalised. Like many halls in rural areas, it does not just serve as an Orange Hall but used by a playgroup, religious missions and other groups.