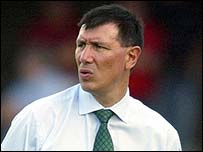 The kind invitation of the Chicago Gaelic Park to the visiting Northern Ireland football team was the cause of protest for others. Up to 80 Irish-Americans, under the title of Chicago Irish Against Sectarianism, vented their anger at the visit of the team. The Voice of Irish Nationalism is unimpressed with the antics as is North Report. The national team are in Chicago as part of their USA tour with the next match against Romania and Hibs player Ivan Sproule (who was bitten by a Uruguay player in the last match) is hopeful of a result.