What if the news was written as it’s actually seen by the ordinary reader? How would the IMC report fare? The Shankill Moaner has a new issue out. In addition to a scarily accurate story on the IMC report, the Shankill Moaner also looks at the peace process in the Middle East, and its parallels to the Northern Ireland Peace Process. FUCK THIS FOR A GAME OF SOLDIERS

The DUP whinge whinge whine and that mope mope mope but Sinn Fein have aye, right, but of course they haven’t.

Meanwhile Peter Hain how am I meant to write about this without smashing my computer?

The historic and hard fought for Israeli/Palestinian peace deal which was signed last week and which promised to bring to an end centuries of bitter strife between the Jews and the Arabs has fallen through after it was alleged members of Hamas have been selling knock-off Silk Cuts in the back streets of Gaza.

“This is a recipe for war,” said an Israeli government spokesman. “You’d think we’d have been happy after Hamas stopped all violence, destroyed its weapons and agreed to recognise the state of Israel but all that means nothing when you think about how that bastard Slabadin Murphhammed is cheating the taxman.”

A UN representative agreed that in real life every little thing has to be perfect and that Israel was completely within its rights to whine the peace to death if it wasn’t. 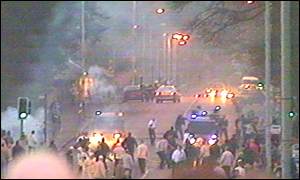 Go to the Shankill Moaner for the rest of today’s issue!